In 2017—just three years ago, but it feels like a century—I posted here a lament for the beautiful, vanishing birds of Sanibel Island. I visited Sanibel again last winter, before we knew what 2020 would become. Before “we” knew, that is: in the middle of February, when I flew home, the public was not alerted to the danger of air travel during a pandemic. The president and his collaborators knew, but shared the news only with some GOP donors and senators who sold off vulnerable stocks—in the airlines, perhaps?

I was aware last winter that the Trump-loving Matt Gaetz represents the Florida Panhandle, exposing a significant portion of the Gulf Coast and its birds to his depredations. I noted his anti-environmental activity in my earlier post, but I thought about Gaetz as little as possible and assumed that he had a safe seat in a very Republican Florida 1st District. I was not aware until recently that he has a serious challenger: Phil Ehr, a retired Navy Commander and erstwhile Republican who is fed up with Trump, Gaetz, and the present-day GOP. Ehr understands the threat of climate change and intends to protect our environment. He wants to put an end to fossil fuel subsidies, ban offshore drilling, and reverse Matt Gaetz’s policy of privatizing the beaches of northwest Florida. There is much more to say about the current campaign—but first, more bad news about birds, and about the egregious Gaetz.

Last winter it was obvious even to a casual observer that the birds of Sanibel are continuing to disappear. Pelicans still perform their extraordinary aerobatics; ospreys still soar back and forth over the condos to the shore, picking up wrack for nest-building. But the numbers were down, and I saw few of the flocks of little “peeps” that once crowded the shoreline, darting back and forth with incoming waves. You could bike or drive around the local wildlife refuge without seeing many—or sometimes, any—of the green herons, egrets, anhinga, night storks, and other stalking, fishing birds that used to create traffic jams of visitors with cameras and binoculars.

While the pandemic rages and people as well as birds die, Trump’s congressional and administrative enablers find time to take apart environmental regulations intended to protect wildlife. Last winter, while I was on Sanibel, Trump dismantled protections that had been put in place for migrating birds. A few months before that, the Endangered Species Act was seriously weakened at the behest of oil and gas companies that donate to Republican politicians.

From time to time I wonder what on earth, or what kind of earth, these climate change deniers, corporate gluttons, and Republican politicians hope to leave to their children and grandchildren. Granted, climate change hits the poor first and worst, but even hard-core deniers must know in some secret part of themselves that there’s not enough money in the world to protect their children. Waterfront resorts (beginning with the Sinkhole at Mar-A-Lago, if there’s a just god) will succumb along with shacks on the beach. Not even private teams of firefighters can keep the flames away from gated communities forever, and some temperatures are too hot even for billionaires . 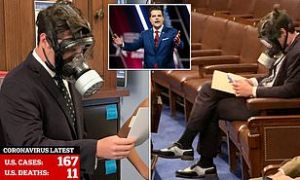 Matt Gaetz seems to feel fine about voting against the environment, and I feel even better about the news that he may lose his seat in Congress. I would prefer not to mention Gaetz at all—he already spends most of his time and the taxpayers’ money showing off. (ICYMI: One of his consituents died of coronavirus just days after Gaetz’s gas mask stunt on the House floor.) However, and only because there’s a chance to defeat him, I’ll write about him once more: partly to urge support for his opponent, and partly because he figures in the story of the vanishing birds and in much else of the crime and cruelty that mark the present administration. In just one example: Gaetz is aggressively “pro-life,” but “life” means only fetal life: he sponsored HR 2742, the “Abortion is Not Health Care Act” of 2019 prohibiting tax deduction for abortion as a medical expense. ”Pro-life” also does not refer to the lives of hungry children in his own district whose families can no longer depend on SNAP—or, for that matter, to the lives of the birds of Sanibel.

On environmental as opposed to reproductive questions, Gaetz’s positions are more complicated than one would assume from his loudmouth right-wing identity. Although it was Matt Gaetz, successfully seeking attention, who proposed the abolition of the Environmental Protection Act during his first term in Congress, political survival trumps ideology. Gaetz’s congressional district includes Pensacola Naval Air Station, Eglin Air Force Base, and several large towns that serve as bedroom communities for military families and retired vets, among whom the active-duty veteran Ehr commands respect. The Pentagon is well aware of the dangers of global warming, recognizing that it already threatens some military bases and affects “strategic decisions… regarding weapons testing and the global movement of humans,” as well as potential conflict in the Arctic. Because Gaetz dare not ignore military interests, he has joined up with congressional colleagues who share some of his environmental “concerns.” The Climate Solutions Caucus is a large, bipartisan group in the Senate and House, established in 2016 to find common ground from which to address climate change. As there is no common ground, the Caucus doesn’t get much done.

Speaking out against his own tribe, Gaetz acknowledges that Republican climate change deniers will be “judged harshly by history.” Of course he threatens a worse fate for Democrats: those “who would use climate change as a basis to regulate out of existence the American experience will face the harsh reality that their ideas will fail”—whatever that means. Ignoring history, and (to name just three) the behavior of Big Tobacco, Big Pharma, and Exxon, in the fantasy world of the GOP the interests of corporations coincide with those of the public, and of the planet. American businesses, in this dreamscape, will turn away from exploitation and pollution to lead the fight against global warming. As is so often the case when Republicans speak, there’s an Orwellian tone to the rhetoric: our beautiful national parks, for example, will be saved by opening them up to private interests.

I have no idea, nor does it matter, whether Gaetz believes any of this nonsense: Republicans tend to speak a language that is deliberately false and/or deficient in sense. Either way, the rhetoric exhibits a desperate attempt to have it both ways, an effort that marks much of Matt Gaetz’s speech and action. Even as he and his Republican colleagues take apart the protection of bird and animal life, Gaetz proclaims his affection for animals. He sponsored HR 1155, known as PUPPERS: Preventing Unkind and Painful Procedures and Experiments on Respected Species. Just as some persons are considered more valuable than others in the Republican world view, so too are some animals: dogs, especially, are to be treated with kindness and respect. Other animals—not so much. Republican “Climate Solutions” will not save the beautiful birds of Sanibel, nor the planet we all inhabit.

Challenger Phil Ehr has an excellent chance to win over enough of his neighbors, fellow vets, and disgusted Republicans to rid Congress of Matt Gaetz. It may be too late for the birds of Sanibel, but an Ehr victory will replace an evil clown with a serious congressperson, not just for Florida but for all Americans, and for our planet.

Watch Ehr’s campaign video, “Cut the Noise,” which shows you what you need to know about these two candidates:

And finally, if you can, please join me in donating to Ehr’s campaign, and spread the hopeful word that Matt Gaetz may soon disappear from public view.

Your comments are welcome Cancel reply

Find my books on Goodreads

Live from the Loft